The People’s Budget is an evolving document that lists either real tax legislation or concepts for tax legislation that demonstrates that the money we need to fund new Government policy on housing, justice and dignity is within our reach.

Whilst our primary focus is on fully-funding the New York City Housing Authority, or NYCHA, we also show that there is so much money available that we can use the extra money that the People’s Budget can potentially generate to end systemic racism in society. For example, the People’s Budget can fund efforts to end segregation in New York City public schools, can make CUNY and SUNY tuition free, can fully-fund Medicaid as a gateway to roll-out universal healthcare in New York State, and to transform the justice system, including policing.

Fight For NYCHA recommends raising income taxes on corporations and on the wealthy. One proposal would eliminate some tax abatements for the Top 10% of income earners. Despite raising revenue, none of these proposals are punitive. In fact, these proposals are reasonable. And some of these ideas are legislation-ready.

The People’s Budget for Housing, Justice, and Dignity 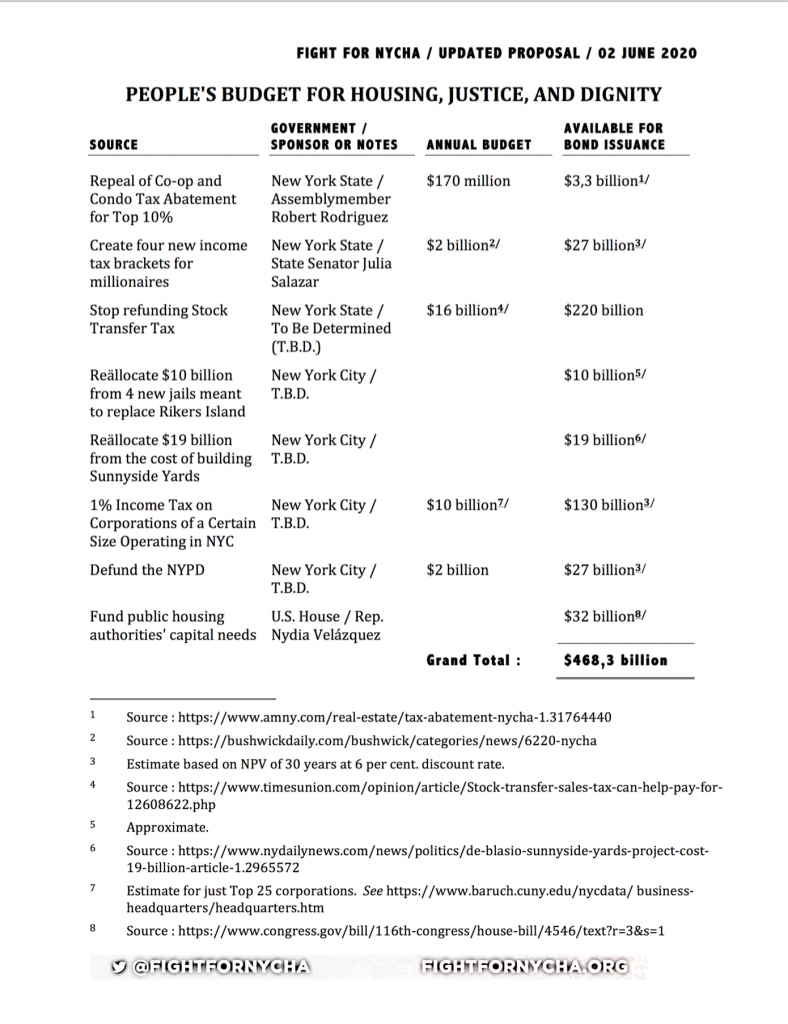 A History of the People’s Budget

The People’s Budget was originally drafted in consultation with public housing tenants, and it was adopted at a town hall attended by NYCHA tenants on Sept. 18, 2019. The People’s Budget is a package of ideas for legislation that will raise taxes on corporations and on the rich and reallocate funds from gentrification development plans to fully-fund public housing and forge new Government policy based on justice and dignity.

A second Town Hall meeting permitted the People’s Budget to be updated.

Two new line items were added at the Feb. 5 Town Hall meeting, showing that over $440 billion in taxes are readily available to fully-fund NYCHA and to fund other, new Government policy for justice and dignity for all New Yorkers.

The current version was updated by the Coördinating Committee of Fight For NYCHA and is subject to adoption at our next public meeting.

The current version of the People’s Budget was updated in June 2020 in response to, and in solidarity with, the Black Lives Matter movement demanding police reform, including by defunding the police. This updated was made by the Coördinating Committee of Fight For NYCHA and is subject to public adoption at our next public meeting or town hall. Please stay tuned for more information.

The current version of the People’s Budget is a public document.