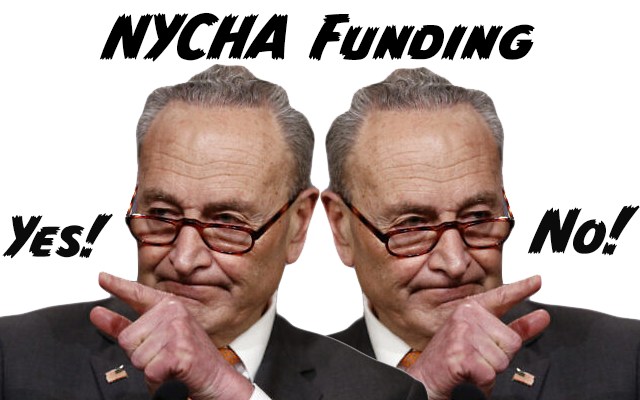 The Infrastructure Bill passed today with no money for public housing.

Because President Joseph Biden (D) worked with the GOP to water-down the Infrastructure Bill, Sen. Schumer has been forced to forget his old promise and make a new promise that the money would instead be put into the Budget Reconciliation that is now under consideration in the U.S. Senate.

Watch as Sen. Schumer’s office have begun to use parliamentary rules that stem from the filibuster to qualify that public housing funding will come with strings attached.

Chuck Schumer : You Promised Us To Save NYCHA. Where Is The Money To Stop RAD/PACT ?

Sen. Schumer has already broken one promise to fund public housing. Will he break another ?

Because of restrictions caused by the filibuster, funding from a Budget Reconciliation can’t come with greater tenant protections. As a result, this puts public housing residents at-risk for bad leases, increased costs, and evictions, because there will be no mechanism to stop the RAD/PACT conversions that Mayor Bill de Blasio (WFP-New York City) keeps shoving down our throats. Furthermore, we can’t demand forensic audits of public housing authorities, and we can’t repeal the Faircloth Amendment that caps the construction of new public housing. We’re scared that politicians will use these limitations to either accelerate Section 8 conversions, or do something worse, like end all Section 9 housing in one fell swoop.

We would prefer that Sen. Schumer pass H.R.235 — the fully-fund public housing bill, with an adjusted funding floor and increased protections we have been requesting — as a stand-alone bill. If he does not come through to protect Section 9 public housing, then we will work to make sure that Sen. Schumer is primaried in the 2022 Midterm Elections. Already, the Democrats are nervous about losing control of Congress.

Based on how they break their promises, they should be worried. 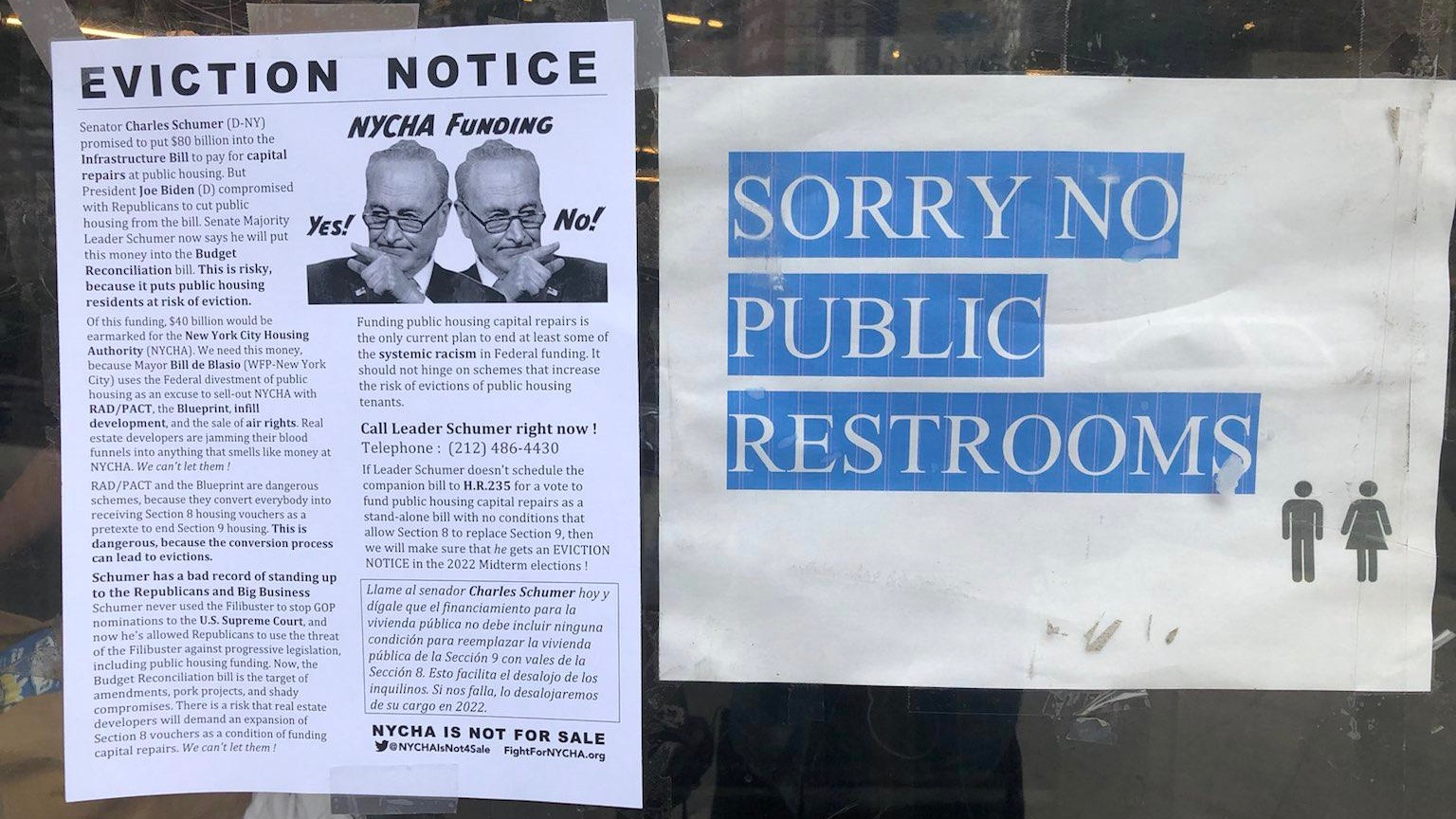 Members of Fight For NYCHA were present at the 18 April press conference, where Sen. Charles Schumer (D-NY) promised to put $80 billion in funding for public housing into the President’s Infrastructure Bill. Sen. Schumer said that the initial proposal of $40 billion that President Joseph Biden (D) had suggested was too low and that the increase would allow NYCHA to receive the $40 billion it needed to complete the backlog of capital repairs that have been used as an excuse by Mayor Bill de Blasio (WFP-New York City) to sell-out NYCHA with RAD/PACT, infill development, and air rights sales.

However, after President Biden gave the keys to the Kingdom to Senate Republicans, they succeeded in watering-down the Infrastructure Bill, leaving no money for public housing. None ! That meant that, as of 24 June, once the GOP compromise was detailed by the White House, Sen. Schumer’s first lie was exposed.

We need the $40 billion that is owed to the New York City Housing Authority, or NYCHA, for capital repair funding in order to stop the privatization of public housing. We need to save Section 9 housing.

There is a corrupt bait and switch going on, and public housing residents will pay for it in higher rents, threats of evictions, and violations of their civil rights.

Since there’s been no money for public housing, unscrupulous politicians, like Mayor de Blasio, are using Section 8 conversions under RAD/PACT and the proposed Blueprint scheme to end Section 9 housing. This effectively ends the New Deal promise of public housing, which was for the Government to admit that it had a role in providing safe and sanitary housing to people at low-cost. What is happening now is that corrupt politicians are using the Section 8 rental assistance voucher programme to replace Section 9, something that was never intended to occur when Section 8 vouchers were first created.

The RAD/PACT scheme that Mayor de Blasio has been promoting leads to higher rents, higher risks of evictions, and violations of tenants’ civil rights. It’s a bad deal that tenants need to reject, and Sen. Schumer knows that.

Now, Sen. Schumer is promising us the public housing funding in the Budget Reconciliation, but that comes with strings attached, like we can’t demand forensic audits of public housing authorities, and we can’t repeal the Faircloth Amendment that caps the construction of new public housing. We’re scared that politicians will use these limitations to either accelerate Section 8 conversions, or do something worse, like end all Section 9 housing in one fell swoop.

Because Sen. Schumer’s office has begun to use parliamentary rules that stem from the filibuster to qualify that public housing funding can’t come with greater tenant protections, this puts public housing residents at-risk for bad leases, increased costs, and evictions. As a result, we increasingly feel that H.R.235 — the bill to fully-fund public housing — should be passed as a standalone bill after it has been increased to guarantee $40 billion to NYCHA to save Section 9 housing and amended to include forensic audit requirements, a repeal of the Faircloth Amendment, education and jobs programs for public housing residents, a repeal of Section 8 conversion schemes, including RAD/PACT, and a provision that any disposition of public housing assets be subjected to the local community approval process that is in effect in each Municipal jurisdiction. This would stop the privatization of public housing.

Since Sen. Schumer doesn’t inspire confidence, we have begun to flyer about these truths, because we are tired of Sen. Schumer coming up short. If he doesn’t pass H.R. 235 as a standalone bill in a way that does not permit Section 8 vouchers to replace Section 9 housing, we will begin to work with anyone, even the DSA, to see that Sen. Schumer is primaried in the 2022 Midterms. As much as we distrust the DSA, we know that they are focused only on self-interest, as is AOC. They only think of opportunism, self-promotion, and expediency. “Power can be beautiful,” AOC said to CNN for her new 2022 Midterms fundraising infomercial, in which she herself doesn’t rule out a primary challenge to Sen. Schumer. That’s a mighty powerful convergence of forces that Sen. Schumer would have to overcome.

New York has become a battleground for a new Democratic Party, where Christine Quinn, Joseph Crowley, Eliot Engel, Corey Johnson, and Jimmy Van Bramer have seen their political careers come to an end after people reached their limits with being sold out. Now, Sen. Schumer gets to decide if he faces the same prospect.

If Sen. Charles Schumer doesn’t save Section 9 public housing, will voters will serve an “Eviction Notice” on him in the 2021 Midterms ? 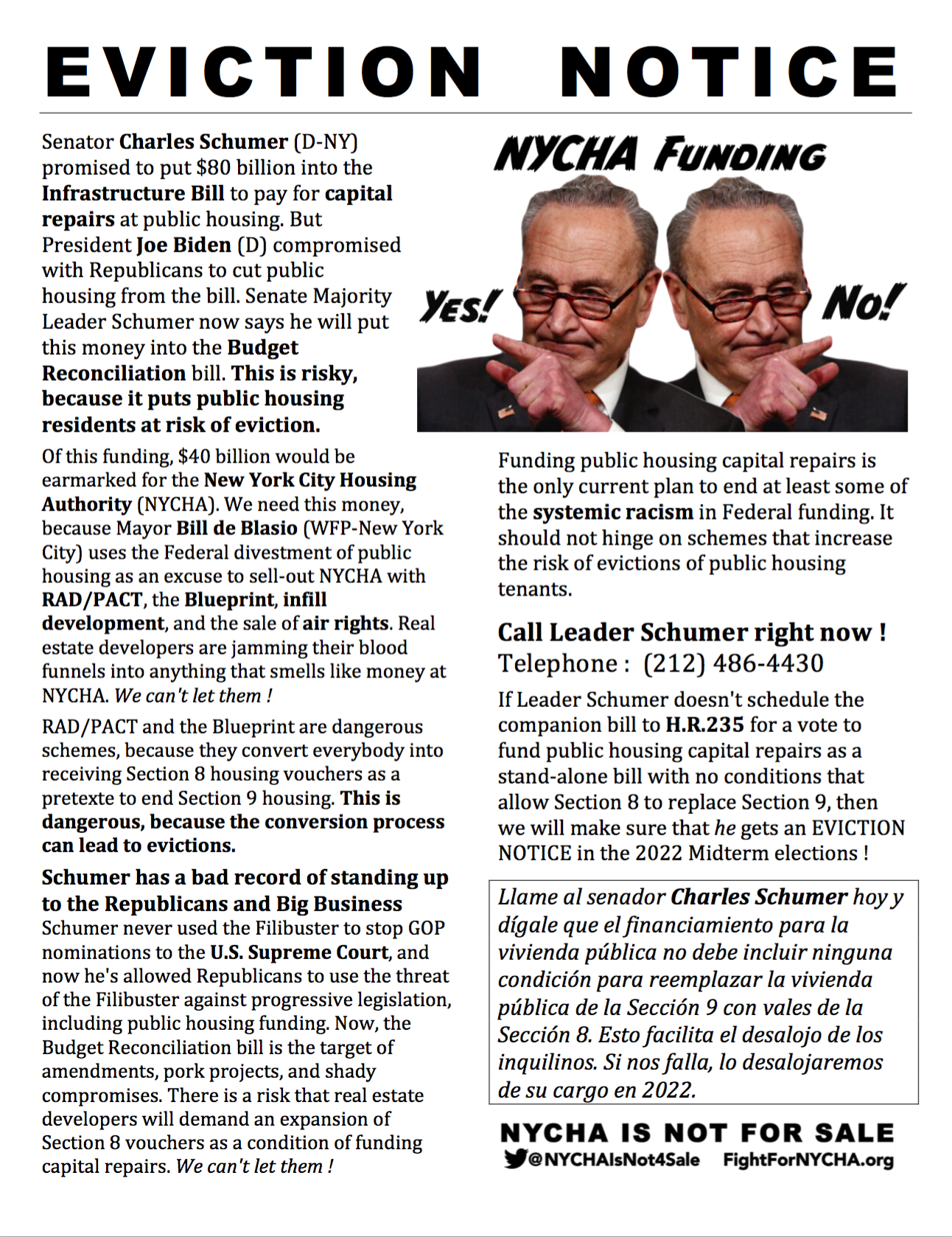 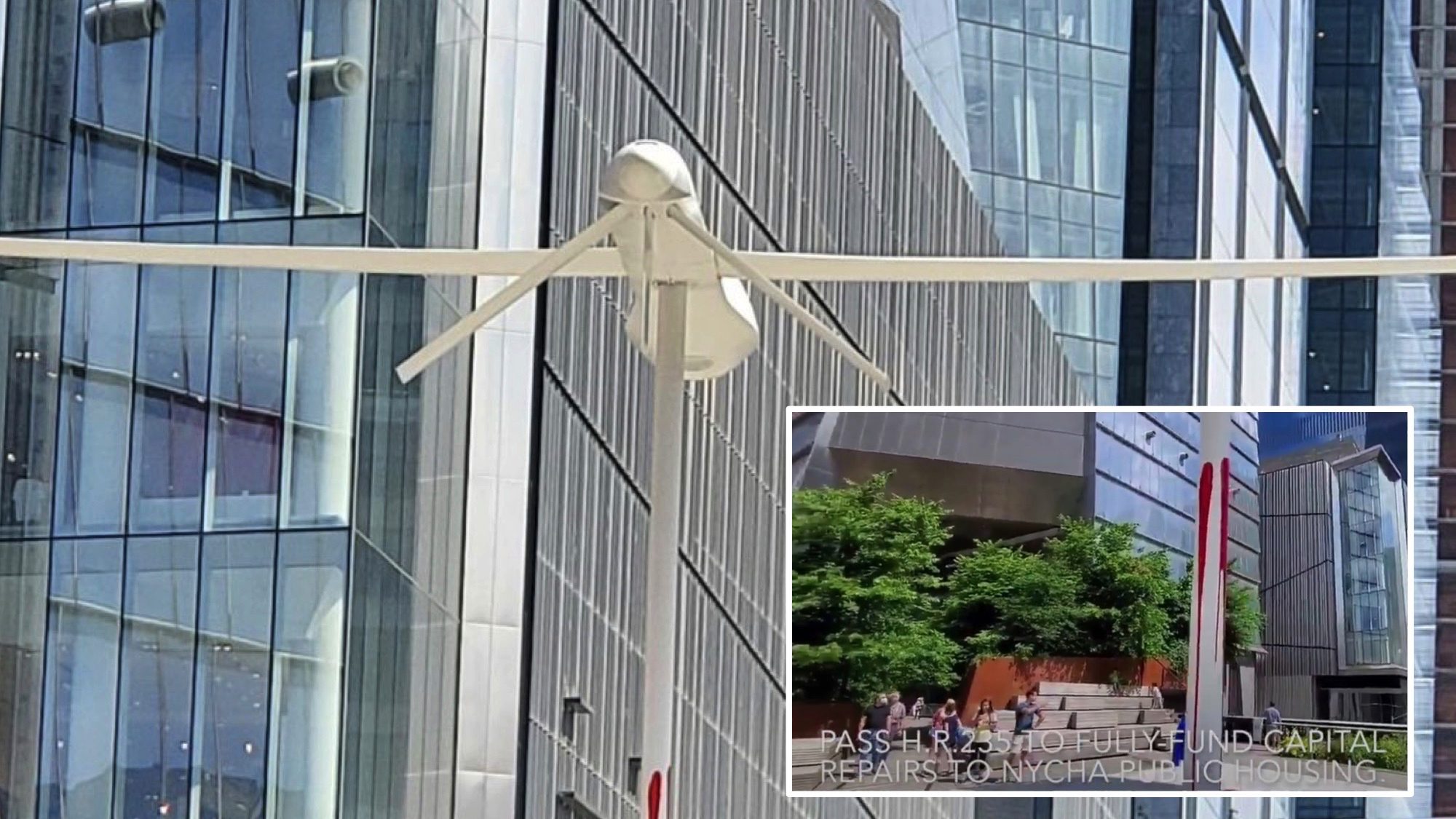 The U.S. Military budget and the filibuster currently prevent the U.S. Congress from passing progressive legislation, like H.R.235/S.598/S.679, which would provide emergency funding for the backlog capital repairs to the Nation’s public housing stock.

Before the Macy’s fireworks display took center-stage in New York City’s East River, public housing activists made their own display at a monument that they alleged glorified endless wars at Hudson Yards.

The activists poured “blood” on the pole that props up an installation of a drone on the High Line Park adjoining Hudson Yards in Manhattan. A banner drop took place concurrently with the “drone attack.”

NYCHA Is Not For Sale : 4th of July Protest and Banner Drop at the Hudson Yards Drone

On 18 April 2021, Senate Majority Leader Charles Schumer (D-NY) promised to support amending H.R.235 so that it would provide $80 billion to fund the backlog of capital repairs to public housing, of which approx. $40 billion would be earmarked for the New York City Housing Authority, or NYCHA.  Furthermore, NYCHA residents were promised that H.R.235 would be put into the Infrastructure Bill being shaped by President Joseph Biden (D) and would provide job opportunities to public housing residents. But H.R.235 was not included in the bipartisan Infrastructure Bill that was negotiated with G.O.P. Senators.