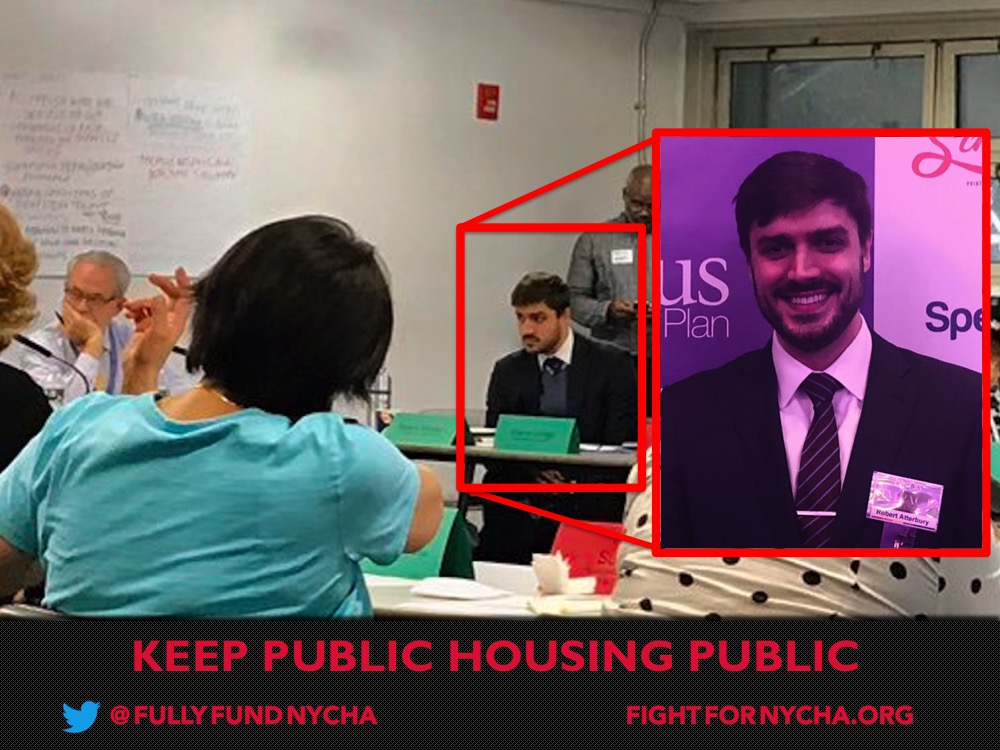 AFTER THE SUCCESSFUL FIGHT FOR NYCHA TOWN HALL, Mayor Bill de Blasio (D-New York City) reportedly freaked out. Two news articles planted in POLITICO New York reported that U.S. Rep. Jerrold Nadler (D-NY 10) opposed the demolition of public housing and was calling for a delay on the Request for Proposal for demolition and RAD conversion of Fulton Houses in Cheslea. One report, in particular, had noted that, in his desperation, U.S. Rep. Nadler had allegedly called on Comptroller Scott Stringer (D-New York City) and Public Advocate Jumaane Williams (D-New York City) to show up to community meetings about the future of public housing. The move to include Stringer and Williams was seen as a political threat to New York City Council Speaker Corey Johnson (D-Chelsea), in whose Council district the four public housing developments are located, which face some degree of privatisation.

But at the first meeting of the working group empaneled by Mayor de Blasio and other Electeds, tasked with determining the future of the New York City Housing Authority, or NYCHA, Deputy Mayor Vicki Been revealed that demolition remained on the table, despite private assurances allegedly made by U.S. Rep. Nadler and others following the Fight For NYCHA town hall.

In order to get video of Deputy Mayor Vicki Been’s presentation about NYCHA’s future, a member of Fight For NYCHA had to risk arrest.

A member of Fight For NYCHA had to risk arrest in order to crash the secret first meeting of the NYCHA Working Group. Please advance to 2:00 to hear audio (and video later) of NYPD Inspector Howard Redmond and, later, other NYPD officers, threaten the Fight For NYCHA member with arrest for demanding to bear witness to the NYCHA Working Group meeting.

Before police showed up to menace the Fight For NYCHA member, U.S. Rep. Nadler’s aide, Robert Atterbury, made deceptive statements by materially misrepresenting the proceedings of the NYCHA Working Group as a secret meeting that was closed to the public. In New York State, Government meetings are open meetings. Yet, Mr. Atterbury repeatedly indicated that a meeting that would discuss the disposition of NYCHA public assets and City real property was not a public meeting and that, improbably, the NYCHA Working Group was not a “civic group.” Under New York State penal code, obstructing Government administration is a class A misdemeanor in the second degree. See § 195.05.

Mayor de Blasio has empaneled a rigged and stacked NYCHA Working Group to determine the future of Fulton, Chelsea, and Elliott Houses. But this working group has purposely excluded tenants from Holmes Towers, Cooper Park, Wyckoff Gardens, LGA Houses, and Harborview — even though infill has been planned at those developments.

What is more, Fight For NYCHA has discovered that Mayor de Blasio has instituted a gag rule, meaning that the discussions of the NYCHA Working Group will be kept secret. This is a violation of Government transparency. It also violates the First Amendment rights of tenants to be able to speak in informed discussions about their own future. The gag rule and the restrictions in attendance also violate the State’s open meetings law.

Please join Fight For NYCHA in demanding to attend and be heard at the second meeting of the NYCHA Working Group.